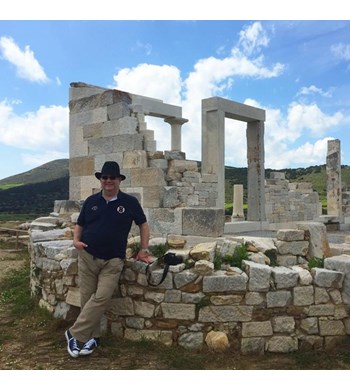 There is much to say about Robert! There are certain people who love to travel, and then there are people that have world culture engraved in their heart and at the core of their very existence.  Bob is the latter.He has been to over 120 countries and to every continent on our planet.  He is an avid traveler and adventurer with a Ph.D. in International Education and the History of Central and Eastern Europe from Columbia University.His fascination with our planet began at the age of 7 when his parents brought him to the NY Worlds Fair and he was intrigued by the many different country pavilions. At the age of 15, he ventured to Alaska, Canada, and the Western US for a 9-week journey that opened his eyes and planted the seed that would forever guide his life.Bob holds the rank of Captain in the US Navy and retired in 2017. From 1979 to 1985, he was on Active Navy Duty completing a western Pacific deployment. Bob returned to active duty from 1996 to 1997 working at the Polish Ministry of Defense helping them become members of NATO. In 2001, Bob traveled to Antarctica for 23 days to help improve relations with the Chilean Navy.But Bob’s travels are far from limited to any distinct organization or life event. From 1989 to 1990, he was the first American Fulbright Exchange Teacher in Poland. Additionally, he has traveled to the Czech Republic, explored the Galapagos Islands, gone sailing in the Bahamas, rafting in Costa Rica, skiing in Austria and Switzerland. Just to name a few of his favorite travel excursions!He has been organizing group trips for over 30 years and loves sharing his passion for traveling and learning with others. He also operates an Airbnb in his home in Patchogue, Long Island NY and owns his own travel business which is called YOLO Explorers Inc. They are a world travel agency but specialize in single and group explorations to western, central and eastern Europe.Bob Borowski has lead numerous group travels to Poland, Italy, Greece, Scandinavia, Belgium, France and elsewhere. He is an outstanding travel agent, educator, humanitarian, and is an exemplary role model for people everywhere.