REDEEM POINTS FOR TRAVEL WITH MY AGENCY Book with my agency and use Membership Rewards® points from American Express for all or part of a cruise, vacation package, flight or prepaid hotel.
Terms & Conditions Apply.

March 8th & 9th, 2006, Wednesday & Thursday 13 ½ hour flight not as bad as I was thinking it would be. United had individual movie screens at each seat. They then played at least 5 different movies throughout the flight. I barely slept and didn’t read any of the magazines I brought. They served more food too. The 1st meal was American – chicken or beef – we had beef . Hours later the 2nd "meal" was noodles & a cookie. Then for what I thought should have been breakfast we had a choice of chicken & noodles or pasta. Upon arrival in Beijing we were met by someone from Viking River Cruise. Took a private BMW to the Hotel Beijing. March 10th, Friday Saw the Great Wall. Wow! It’s impressive and very hard to walk up. It’s so high up in the mountains it’s hard to catch your breath. Tina (our tour guide in Beijing) asked if we wanted to up the easy way or the hard way. Basically same view, just on the easy side there are more people and on the hard side less people. We choose easy! There were a lot of people. I can’t imagine it during peak tourist season. Speaking of peak season, it’s not. It’s cold. Well not so cold as at home, but cold. No snow. 45 degrees in Beijing but colder at the wall. After the wall we went to Jade Factory for lunch. Lunch was unusual to say the least. Then we went to the Silk Market for 2 ½ hours of shopping. But I didn’t like the feeling of being "mugged" so we only shopped for 2 hours. Came back to hotel and slept for 1 ½ hours then went to have an authentic Peking Duck dinner. That was fun; different. Shopped some more on way back to hotel. Went to bed at 10:00pm last two nights but keep waking up at 2:00am and tossing and turning until 4:00am when I finally get up. Very dry here. Nose and throat hurt when I get up. March 11th, Saturday Drove past Tienamen Square. Got out and walked the Forbidden City. Walked, and walked, and walked. It’s 250 acres! It was neat though. Then went to airport to fly to Chongquing. Chongquing reminds me of Las Vegas. All the buildings are lit up. The city is so clean here to. So far Beijing and Chongquing airports and city have been very clean! Let me tell you about getting on the Viking Century Sky! We pulled up and right outside the "bus" was a drop off. Our guide from the airport to the boat – Jonason- said there was 140 steps to go down to get to the boat. He said when we get off the bus there will be men wanting to help you down the steps or carry your bags, or both. If you need help, by all means use them and tip them a couple dollars. If you don’t need help firmly say no. Well mom needed help so she had two guys helping her! I didn’t’ need help and they left me alone. But I have to say those 140 steps were "Oh My Gosh!" They were wide open, no rail and it was a loooooong way down. And then when we got to the bottom we had to walk across rocks for a couple yards before we reached the gangplanks, which were wobbly. I thought it was fun – but I can see some people who wouldn’t. Handicapped accessible it is not! Dinner on the boat was great! Shining is our waiter – she’s fun. March 12th, Sunday We departed Chongquing this morning at 7:30am. Wow we are going fast! It’s rainy but that explains why it’s so green along the river. The Century Sky has two glass elevators, facing outside. If you don’t think you get motion sick on a "cruise" try stepping into a glass elevator, on a ship, that faces the water. We attended a Yangtze River talk. Fact; 3rd longest river in world beaten only by the Amazon and Nile. Went on the Snow Jade Cave excursion. Can I just say "Oh My Gosh! There were 200 steps to get from the ship to the parking lot. Then when we got to the Snow Jade Cave we had to practically climb a mountain to get to it. Then inside there was 800 steps!! All in all we did about 1200 steps that day! Boy was I beat. The cave was beautiful though! March 13th, Monday Woke up today to beautiful scenery. We are coming up to the Three Gorges. "Shore excursion" today was Lessor of the Three Gorges. Wow! Gorgeous! Awesome! Hope the pictures turn out. It was overcast. This is our third night onboard. We depart tomorrow. When we departed we sailed through the Second Gorge. Absolutely stunning. March 14th, Tuesday We docked last night be we didn’t get off the ship until 2:00pm. Then we went on a dam excursion. It was interesting, but it made for a long day. We ate breakfast from 7:00am-9:00am, then stayed onboard for lunch, then got off at 2:00pm. Did the dam excursion then went to the airport to fly to Shanghai. We landed around 9:30pm and I went to bed at 11:00pm. Still not adjusted to time, but I slept till 3:30am instead of 2:30am! March 15th, Wednesday Got out of bed at 5:30am. Going sightseeing today. Last of the shopping! Shanghai is very modern. The saying in China goes "If you want to see 100 yea 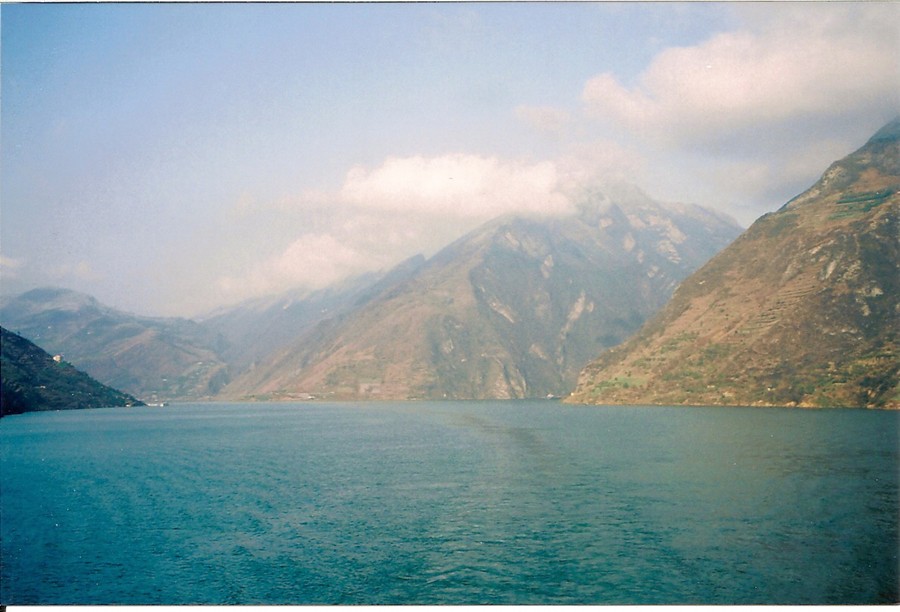