Journey to the Hashemite Kingdom 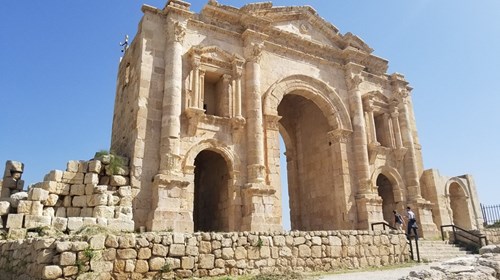 The official name of our host country is the Hashemite Kingdom of Jordan. The Hashemites are the ruling family of Jordan, who can trace their lineage back to Hashim ibn Abd Manaf, the great-grandfather of Islam's prophet, Muhammad. Hashemite leaders were at the forefront of the Arab Revolt of 1916, when the Arab tribes of the region rose up against the Ottoman Turks, who had ruled the Middle East for four centuries. After World War I, what is now Jordan (known then as Transjordan) was governed by the British, who granted the nation its independence in 1946. The present King of Jordan is Abdullah II, who succeeded his father, Hussein, upon his death in 1999.      Our tours in the country would be conducted by Abercrombie & Kent, an experienced company well-suited to give their clients deluxe, informative tours in just about any country of the world. At Travel Designers Travel Leaders, we've worked often with A&K, helping get our clients the best overseas experience possible. There are clients who prefer to wing it when they get to their destination, or those who like to set up everything for themselves beforehand, but we caution people to remember that they're going to a foreign country, where they may not know the language or be familiar with the customs. Going to Jordan, for example, is not as simple as, say, a trip to New Orleans. Utilizing the services of a reputable company like A&K ensures that the traveler will have the best (and safest) possible experience.     Our A&K driver met us at the entrance to the hotel lobby, and we began our tour of the city of Amman. The Jordanian capital is a city of 4 million people, and like virtually all major cities of the Middle East, it is a mixture of the modern and the ancient.