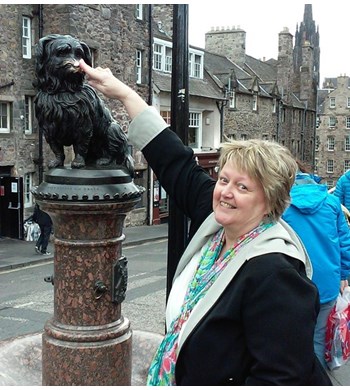 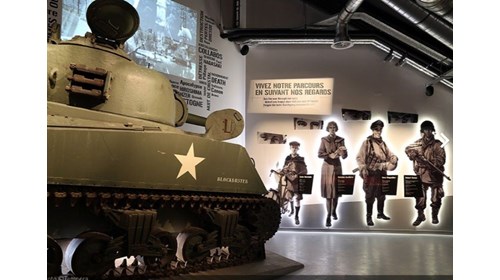 I have visited the amazing Battle of the Bulge monument in Bastogne, Belgium twice before my Dec. 2019 visit. Each time offered something a bit special - the first visit was with my father, a WW2 Veteran who served in Europe as B17 crew and crash landed in Belgium. The second visit was with my husband, a Vietnam Veteran, who deeply appreciated the new museum. But my third trip (Dec. 2019), was with my 2 adult sons. It was their first trip to Belgium, but I suspect it won't be their last.

We were greeted outside the museum by an art exhibit of paintings done on fragments of the Berlin Wall. That set the stage - this would be an exceptional visit as well. We spent hours in the museum, pouring over the many displays, watching short films and videos, and pointing things out to each other in hushed voices along the way. The filmed reenactment is very well done and quite moving, but felt even more real as we stepped out of the museum into the same kind of weather and snow fall just seen in the film. It certainly made it easier for us to imagine the conditions our soldiers fought in, as we walked across to snow covered grounds the monument.

After viewing the Battle of the Bulge monument, we drove into downtown Bastogne, where a Sherman war tank is still displayed. Bastogne is a bustling town and was decorated to commemorate the 75th Anniversary of the famous battle. We enjoyed an excellent lunch downtown along with a variety of Belgium beers (so good). We rounded out our day trip with a visit to the 101st Airborne museum nearby, housed in the former officers mess building of the Belgian Army, built in 1936. This prestigious building was used by the German army during their occupation of Bastogne. An exclusive collection of items from the Battle of the Bulge and window displays of amazing lifelike scenes take you into the dramatic period of the Battle. The basement is outfitted as a Bastogne basement typical of that time, so you can see, hear and feel a bombing experience while "hiding with locals" in this shelter. We all agreed, this museum is definitely worth a visit!

There are also other WWII sites in the area to visit, such as the Bastogne Barracks and a 5 km bike tour that takes you in the footsteps of the Battle of the Bulge.

Bastogne can be reached by car in approximately 2 hours from Brussels or 1 hour from Luxembourg City.