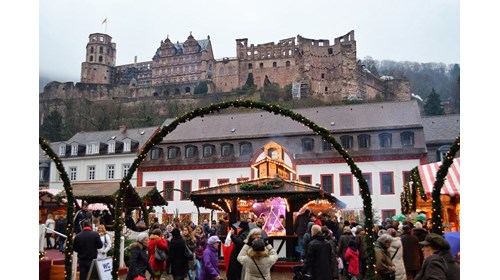 Heidelberg/Speyer market - the shadows of castles

We wanted to be in Europe for Christmas and New Years Eve but then my birthday is early December so we decided "why not" lets just spend a month and see all the Christmas Markets and have the full experience.

So we started with 5 nights in Madrid (since that is where our miles took us) and really had the usual city tours pre-planned. No food tours this time since we had already picked out every restaurant we were going to!We look for the oldest everything and this time was no different. All  great restaurant choices:

Christmas Markets in Madrid were very Piñata like. Colorful and lots of candy filled everything, pretty popular too since everyone was buying them. Plaza Mayor is the main square and although during the day there are many streets with in and out access, at night the Police had 1 street in and another out. All about crowd control and very well done but we felt like cattle.

We took advantage of one of our days and took the train to Segovia to see the famous Roman Aqueduct. Took the 6am train for plenty of time to spend the day in the amazing city. There is so much to see and a total walking city. Lots of shops and restaurants and again we had picked out our place for lunch - reservations are needed as it is the place to go and famous for their suckling pig: https://mesondecandido.es/

We flew to Budapest where we had been several times before. But of course we went to our favorite Gerbeaud and had the usually chocolate something and coffee. https://gerbeaud.hu/#hero  Straight down the pedestrian street you come to the Central Market which was beautifully decorated and full of all the goodies one finds in these markets. We head for the paprika first! It is walking distance to the dock where we boarded the Viking Ingvi for our Danube Waltz sailing. Viking docks right in the center of Budapest on Pest side.

We had been to most  of the cities on this itinerary but it was summer so it was exciting to see everything all holiday upped! Our ship stopped at Bratislava, which was a bit of a dark city. They had lots of holiday happenings but not nearly as many lights as most cities. Our ship docked about 1 mile from town and although it was a very safe walk back to the ship it was dark! Next stop Vienna, what can I say, may family lives here and it is one of the most beautifully decorated cities in Europe, so many of palaces and every single one was decorated differently. Then on to Krems, home of Gottweig Abbey and then we headed for Linz where more of my family live. We had not been here before. Its an absolutely beautiful city with a main drag of high end shopping and Christmas markets at both ends. Our cruise ended in Passau the confluence of the 3 rivers, The Inn, Ilz and the Danube. I have to admit sailing into this Christmas village was so much more beautiful than the summer!

We rented and car and headed to the Romantic road for our drive to Innsbruck. We walked to the car office, picked up the car, drove back the ship, loaded our luggage and we were off. First stop Nordlingen which is a city inside a meteor crater, 9 miles across. https://www.bavaria.by/visit/noerdlingen/ Had to see it! It was daytime, did a little shopping and on to the next town.

Next top Augsburg which has the ONLY live advent calendar in the world. Had to overnight here to see this event. The windows in city hall are filled with dancers that come out to create the live calendar. The market surrounds the city hall and it was something to see.

On to Neuschwanstein Castle https://www.britannica.com/topic/Neuschwanstein-Castle  In the middle of nowhere and here is this castle. You park down below and take a bus to the top.  Many say Walt Disney created the Magic Kingdom after his visit here-I don't doubt that . You can also visit the Hohenschwangau Castle which is the smaller castle and not nearly as elaborate. King Ludwig II that built Neuschweinstein was raised in Hohenschwangau. They say he went mad!

Then on to Innsbruck where we spent 3 nights and dropped the car. Its such a fun ski village, although we didn't ski we did take the Funicular to Seegrube which is at the top of the Nordkette. It was snowing on 12/24 and it fell at the rate of a foot an hour, more than I have ever seen. Had lunch with a group from Capetown that had never seen snow. They were in disbelief in what that was all about. Spent Christmas up there too.

Took the train to Vienna to visit family and then on to Prague for New years Eve.

Christmas was big in Prague but NYE was bigger. Fireworks in 6 directions and they spare no expense. Had an amazing dinner at Mlynec - highly recommended. Its right by the Charles Bridge so after dinner we had front row right on the river for all the fireworks. https://www.mlynec.cz/en